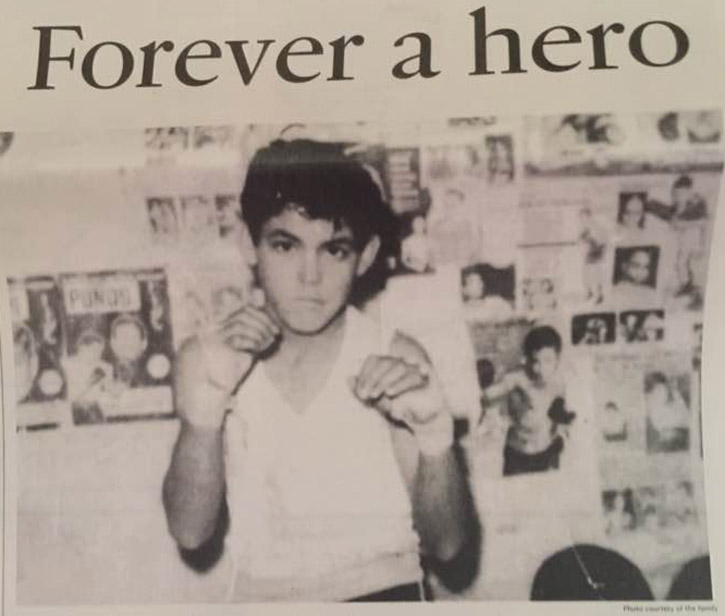 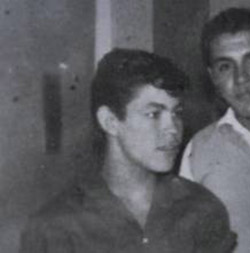 Family photos hang in the home of Marlo Kindermann in her small California town. Among them is a picture of a Kansas City man she never met. Primitivo Garcia, known as Tivo, was coming to the aid of his English teacher in 1967 when he was fatally wounded. “He saved my mother’s life — he saved my life,” Kindermann said. “He made it so my son could be born. “He died for all of us. When I need to restore my faith in humanity, I think of Primitivo Garcia.”

In Kansas City, that story makes Alfredo Garcia smile a sad smile. Nearly 50 years later, he still misses “Tivo.” On late fall nights, like those now, air crisp beneath a starry sky, he hears his brother’s words. “Run, Alfredo! Run!” Alfredo didn’t run that night in the fall of 1967. He was 21, new to the country, and people were yelling and everything happened so fast and he didn’t want to leave his brother and then the gunshots came. Tivo Garcia fell.

The brothers had run to the rescue of their 25-year-old teacher, Margaret Kindermann, who was being attacked by several youths outside Westport High School. She was five months pregnant — with Marlo. Tivo, two years older than Alfredo, led the way into the fight because he always led the way. Primitivo Garcia was strong and handsome, always his mother’s gentleman son and always his brother’s hero.

They had come to this country for the American dream: find jobs, work hard, raise their families. Bullets ended all that. The attackers, ranging in age from 13 to 17, scattered into the dark and Tivo lay on the ground. The teacher placed her coat over him, and Alfredo knelt at his side. “Take care of Mama,” Tivo told him. “Now, you live the dream.”

Alfredo is 69 now and retired. He and his wife, Rachel, raised four children and sent them all to college. “I worked hard for this country,” he said. “And I called my mother every night.” His voice broke with the words that came next. “I hope my brother would be proud. I’ve done the best I could.”

The brothers had come to Kansas City, along with their mother and younger sister, from Chihuahua, Mexico.They were the last of the family of 10 children to arrive in America. The father, who ran a grocery store, had died five years earlier. Irene Mendez, the youngest of the bunch, said the older ones when they first arrived stayed with an aunt who already lived here.

“Then they helped the younger ones come here, one at a time, until we were all here,” Mendez said. Tivo and Alfredo got jobs and earned enough money for a down payment on a house for their mother in the 2700 block of Holly Street on the city’s West Side. Tivo worked as a shipping clerk and set about collecting lumber to add two rooms for him and his fiance after they married. He wanted to become an American citizen. That’s what led him and Alfredo to take English classes at Westport High in the fall of 1967. “He was living the American dream,” Mendez said. “ He had a good job, he worked hard — and he spoiled me.”

The teacher, now Margaret Kelso, remembers the brothers in those first days of classes. “They were not used to schooling, it was clear,” Kelso said by phone from her home in California. “But they were enthusiastic. They were quiet and shy and very polite.”

And on the night of Nov. 15, 1967, in the shadows of a street in Kansas City, she learned something else about the Garcia brothers: They were gallant. She was standing outside Westport High after class, waiting for her sister-in-law to pick her up. That’s when the muggers came along. Some were juveniles, others were older teens. One, who would eventually be the shooter, grabbed her purse. The others rifled through it, then tossed it back and forth, teasing her, before throwing it across the street. Kelso went to retrieve it.

That’s when they grabbed her. They groped her. They ran hands up her skirt. She screamed for help. “I told them I was pregnant and to please leave me alone,” she said. The Garcia brothers arrived. It wasn’t Tivo’s first time as a rescuer. As a teenager in Mexico, he pulled an assailant off a man who was being stabbed. Tivo tossed one of the attackers aside and threw punches at the others. He had boxed in Mexico before an injury forced him to quit.

“Shoot him! Shoot him!” one of the attackers yelled. Gunshots. The gang ran away. Kelso and Alfredo ran to Tivo. Alfredo told the teacher to call for help and said he would wait with his brother. “I didn’t know he could speak English,” Kelso remembers thinking.

The phone soon rang at the Garcia house on Holly. Mendez, the little sister, 15, answered. Kelso told her what had happened. “Your brother’s a hero — he saved my life,” she said in tears. What happened that night has saddened Mendez for nearly 50 years. But she gets comfort, somewhat, from knowing that what Tivo did that night was who he was.

“We were raised by my mom,” she said. “She didn’t have a day of school in her life, but she raised us with respect and morals. Tivo got that from her. “He could never see something like that happen to a woman and not do something about it.”

For two weeks, the large Garcia family held vigil in Tivo’s hospital room, first at Kansas City General and later at St. Mary’s, some of them leaving only for work. In days to come, people lined up to give blood for Tivo. Police arrested the attackers. Donations poured in to help the Garcia family. Kelso visited Tivo and his family. Missouri Gov. Warren Hearnes wrote to Tivo’s mother.

“The brave and selfless act of your son, Primitivo, in coming to the aid of his teacher was an inspiration to all who heard about it, myself included.” Hearnes made Tivo an honorary citizen of Missouri. At 2:15 p.m. on Nov. 28, 1967, Tivo, 23, died during surgery, his third. More than 500 people crowded into Sacred Heart Catholic Church for the funeral on Dec. 1. The priest told the gathering that Tivo “lived our Lord’s words. Greater love has no one than this: that he lay down his life for a friend.”

Tivo Garcia was buried in a new suit his mother had bought him for Christmas, a suit intended for his wedding. Burial was at Calvary Cemetery, on a damp, cold and overcast day. A week later, Time magazine did a story about a young Kansas City man, a Mexican immigrant, who risked his life to save his teacher while others watched. It called him a “folkloric hero,” and said, in part: “If Primitivo Garcia had been like the U.S. citizens who were around Westport one cold night last month, he would be alive today.”

Tivo’s mother later showed a Star reporter a picture her son had painted. It was an oil of a festive Latin couple dancing. It was unfinished, a metaphor to her son’s life. She talked about her son wanting to get married, go to school, become a citizen and do good for his family. “He wanted to be someone,” Gregoria Garcia told the reporter.

Alfredo Garcia said his mother was never the same after Tivo died. He thinks she felt guilt the rest of her days. “She was the one who said we should come here, for a better life,” Alfredo said. The story of Tivo Garcia is a tragedy that brought two families together, forever bonded by 10 seconds on a cold, dark street. The Kindermanns and Garcias visited over the years.

“We have claimed them as part of our family and they have claimed us,” Marlo Kindermann said recently. She paused and then told a story. “I never knew Primitivo Garcia, but I think of him. Not every day, but sometimes when life is hard. He is a force in my life. I have felt his presence. We’re not Catholic, but I’m convinced he’s my guardian angel.”

On a recent day in his Kansas City, North, home, Alfredo Garcia broke out a large envelope of newspaper clippings. Nearly a half century has passed, but his pride in his brother is still fresh. He looks long at the old photos, including one of a dedication of an elementary school named for his brother. Another shows the crowded funeral. One thing that often gets lost in this story is that Alfredo ran with his brother that night. He was just as brave, but Alfredo always waves away such talk. He doesn’t want to talk about what he did. Nor does he want to talk about the attackers.

He wants to talk about the good. Like what happened to his teacher after that night. She had that baby, and the little girl turned out to be Marlo Kindermann, who is also a teacher. Maybe she’s had boys in class like him and Tivo. And Kindermann named her son Tivo.

As for Alfredo, Tivo is still his big brother. He remembers the smile and the hopeful spirit that made Alfredo want to follow him everywhere. Tivo always did right and good, and that’s why Alfredo tagged along. And that’s what he did that cold night a long time ago. Now, Alfredo pushes grief aside and stands strong for Tivo. “My brother was never sorry for what he did.”