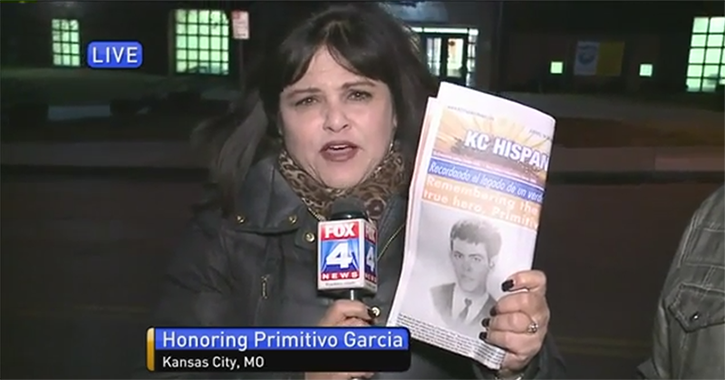 The Garcia family is extremely grateful to Joe Arce and all of his hard work throughout the years as well as his contributions in sharing the legacy of our beloved Primitivo Garcia. 25 years ago he did a 2 part televised story on Fox 4 News and brought back Tivo’s story to Kansas Citians.

Once again here is Joe Arce from KC Hispanic News sharing the history of Primitivo Garcia and telling us why it’s important to keep the legacy alive!

KANSAS CITY, Mo. — A young Mexican man who lost his life saving his teacher is being honored 50 years after his heroic act.

On Monday the city of Kansas City will proclaim this week as Primitivo Garcia week.

Primitivo Garcia School’s motto is, “a school for leaders” and for decades Garcia has been remembered as a person who was a leader and got involved and saved not one but two lives.

In November of 1967, Garcia and his brother Alfredo were taking ESL night classes at Westport High School when their 25-year-old teacher was attacked.  His teacher was five months pregnant.  Garcia was shot but lived for several days.

For Garcia’s family, the people of the westside and especially his teacher– Primitivo Garcia is a true hero. Garcia and his brother had worked to buy their mother a house, and he planned on getting married and becoming a citizen.   Then governor at the time Warren Hearnes made him an honorary citizen just hours before he died.

A special commemoration will be held here at the school this weekend with the proclamation that this week is Primitivo Garcia Week. Margaret Kelso will share her story and how that night has affected her life–her grandson is actually named after her hero.

The vision of the Memory of Primitivo Garcia Committee is a Kansas City Hispanic community that remembers Primitivo Garcia’s heroic actions and his legacy continues through thePrimitivo Garcia Elementary School. We invite you to follow us on Facebook, Subscribe to our blog and Save the Date of Saturday, November 25th, 2017 for our 50th Year Memorial Celebration.